Bosses are strong enemies with high damage and hp found on the 5th level of each floor (levels x-5). Based on the current terrain, Bosses are chosen at random.

After defeating a Boss in level mode, a Golden Chest with higher chance of dropping a rare, epic, or legendary weapon will spawn. This does not occur at 3-5, as there is no point in giving the player a weapon after the game is over. However if the player has Loop Mode on, a golden chest will spawn.

Sometimes the summoned minions of the Boss will still be alive even after its death. This can happen if the boss dies before the minions appear from the summoning attack, as any minions already summoned will die with the boss.

Since version 1.5.1, Boss rooms are indicated by red entrances in some versions, which turn normal after entering the room. This entrance is not to be mistaken with an all-champions room, in which all the enemies in the room are Champions. Two Bosses will spawn if the player has the “Fight with 2 slightly nerfed bosses in each Boss room” Challenge condition.

If the Boss has less than half of total HP, it will become enraged

and will start to use more powerful attacks, as well as attacking much faster and more aggressively. In addition, Enraged Bosses will recover from debuffs much faster than usual (1 second instead of 2). At half of its total HP and upon death, they will also drop 10 energy orbs for players to recover. Upon death, they will drop a lot of Gold, materials and energy.

There are exceptions, however:

Here is a list of all Bosses, sorted by floor:

Can block movement and cause 4 damage. Found in the Giant Crystal Crab bossfight.

Can block movement can cause 6 damage, can inflict Burn. Found in the Giant Golden Crab bossfight.

Can pass through walls and shares the same characteristics of an enemy. Found in the Snowman King bossfight.

Spawns a fire pool upon landing. Found in the Easter Bunny bossfight.

Spawns a poisonous fire pool upon landing. Found in the Easter Bunny bossfight.

Releases a circle of 2-damage bullets that can freeze. Found in the Easter Bunny bossfight. 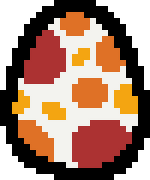 Can pass through walls. May cause Burn upon exploding and cannot be stopped. Found in the Nian bossfight.

Places a fire pool upon landing. Found in the Nian bossfight.

Will split into smaller cluster bullets upon hitting a wall or getting hit by a melee attack/melee weapon. Found in Nian, Dark Grand Knight and C6H806 bosses.

Cannot be destroyed. May spill out long bullets.

Can pass through walls. Found in the Zulan the Colossus bossfight.

Explodes after a while or if is hit with projectiles/melee attack or weapon. Spawned by the gray Baby Dragon Bro.

Places a green fire pool upon landing and deals 2 damage quickly. Poison and Fire Immunity reduce the damage by 1 each, having both makes the player immune. Found in the Headless Knight bossfight.

Spawns a purple pool that damages the player and causes the Weary debuff. Found in the Anubis bossfight.

Spawns mummies every 2 seconds. Found in the Anubis bossfight.

Homing and can cause Burn. Unlike other homing projectiles, never stops homing in on the target. Found in the Floating Laser UFO bossfight.
Add a photo to this gallery

Retrieved from "https://soul-knight.fandom.com/wiki/Bosses?oldid=74442"
Community content is available under CC-BY-SA unless otherwise noted.