No extra damage when shield is broken

Knight is the first playable character, being the default character unlocked at the start of the game. He wears silver armor with a red bandana scarf wrapped around his neck.

He can also be encountered during a run as an NPC. Upon interaction, he will give the player a random weapon equal to a brown chest in the same floor, which means the higher level the player achieves, the better reward he gives.

The Knight is free being the default character and thus does not require anything to unlock.

Knight currently has 14 alternate skins, which include:

The Knight has one of the highest health of all characters. He is hard to kill and his energy is average as compared to other characters, which makes him very suitable for starting players. His starting buff also greatly increases his defensive capabilities. However, his damage output depends solely on his weapon. He also has no way to evade damage and relies only on his high stats and starter buff to stay alive, which makes him less preferrable for higher difficulties.

Each upgrade changes the stats slightly. 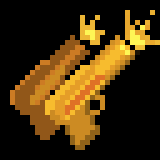 Wield the current weapon in both hands for a short duration. 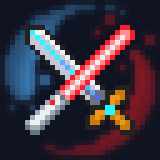 Wield all weapons in the stock simultaneously for a short duration.
How to unlock 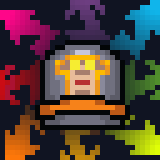 For a short duration, inflict a random effect on enemies hit by your weapons.

"You go, I'm taking a break"
"Talk to my hand!"
"They never shut the fridge door"

"More school time after the holidays..."

"Hey! You are here as well"