Statue of the Knight

Statue of the Rabbit redirects here.

The Statue of the Knight is one of the 9 statues found in the game.

Worshiping this statue gives an effect that allows the player to summon a follower knight upon using skills.

The statue's ability has a cooldown of 8 seconds.

Try to use the followers as a distraction. It can be very helpful during boss battles, as it gives you space to regenerate your armor and to attack the boss safely.

Knights are affected by the Pet buff such that they have significantly higher health (damage is not affected), and the Melee Reflect buff allows their attacks to return enemy projectiles.

The double statue buff summons two knights when the statue's effect is triggered and keeps the same CD. 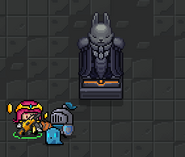 Encounter with Statue of Rabbit

Rabbits summoned by this statue (identical to the Pet Rabbit)
Retrieved from "https://soul-knight.fandom.com/wiki/Statue_of_the_Knight?oldid=62464"
Community content is available under CC-BY-SA unless otherwise noted.