The Origin is the endless wave mode of the game.

Its premise is that it took place prior to the current game time.

The world then fell into chaos, until now, when the heroes attempt to collect the Magic Stones in every main run to restore balance to the world.

The entrance to The Origin is the Ancient Portal. 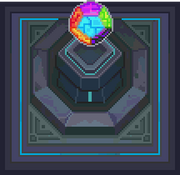 Once it has been destroyed, the Magic Stones will scatter around in different directions and end the game.

At the start of each wave, enemies will spawn from the Portals. The Purple portal in the minimap indicates the spawn and route of enemies for that wave, whereas the Blue portal indicates that that portal and route will be idle that wave.

They will try to ram into the Ancient Magic Stone, and attack anything in their way.

Enemies get a speed boost upon spawning, similar to stepping on a Boost tile.

Every 15 waves, enemies (including Bosses) will have their health increased by 100% of their regular health. This stacks with the double HP condition so enemies' health will scale to twice as high and doubling from there, reaching even five to six digit numbers in later waves.

Every 45 waves, damage of enemies are increased by 2 each hit, except for the lasers, shockwaves and ice trail attacks of Bosses which are not affected. Sometimes, the splash damage from an energy explosion will also not scale up acccordingly.

Enemies that do not walk normally (like Frog, Battery (Enemy) and Devil's Snare) do not spawn from portals, but may appear as a result of the Summoner. In the case of the Frog, it may spawn after transforming an enemy with the Staff of Anubis as well.

There are 3 pedestals to the right of the Ancient Magic Stone that look like the ones in the Turrets Room. During preparation time before waves, the pedestals spawn items for player. Each time player can only choose one item, causing other items to despawn. The items can be:

The player can get 10 buffs from the pedestals. The pedestals spawn buffs every 5 waves. Activating any modifiers related to buffs will increase or decrease the max number of buffs the player can get, but will not affect the number of buff choices, though this may be subject to change in a future patch. Getting buffs from the Garden, however, allows the player to hold up to 19 buffs. They can only provide buffs the player doesn't have and should they not choose a buff, it will offer a different selection of buffs after finishing a wave.

Note that if a weapon is placed on the ground for more than 12 seconds, it will disappear. Attachments do not despawn, unless the player quits the game.

There are some NPCs inside the Origin to aid the player in defending the Ancient Magic Stone. Once the preparation time for waves ends, they will be locked out of the battlefield and the player cannot get to them during waves unless they are already inside the NPC area. There are 5 NPCs:

There are many strategies to this mode. A recommended strategy for the player is to use their coins on buying and upgrading blindages. This creates an almost invincible wall (as long as the player doesn't trap themself) and will be very helpful during later waves.

The Priest's healing skills (especially Regeneration Pact) are very helpful as the player can repair the turrets and the walls for free, allowing them to save money on more important subjects. The effect can be improved with Mentor's upgrades, allowing her to heal massive amounts per skill use and withstand longer against gunfire. It also prevents significant spending increments as the mechanical engineer's upgrades are rarely even needed unless the enemies are really overwhelming the defenses.

It is recommended to bring in Railguns, Launchers and Laser Guns since they can damage multiple enemies at once. Weapons that can Freeze or Stun like the Glacier are also useful for hindering enemies from damaging the player's defense. The Pierce Buff along with a powerful ballistic weapon, or those who have infinite penetration like Soul Calibre are also decent choices. Boosters, EMP Devices, and sometimes energy devices are critical too, as one boosts damage to compensate for the high health levels, the other can occasionally neutralize projectiles, and the final tool can potentially help with energy shortages.

It is not recommended to use melee weapons, as the Blindages would tank most of the projectiles anyways. Bouncing projectiles are still a major concern, however, as they can damage both the player and their defenses. That being said, the EMP Projectile can take some heat away from the blindages, but the player should not rely on them completely and instead, focus on taking down enemies as fast as possible.

Try to put as many turrets as possible and arm then with the best possible weapons, as their damage DO NOT scale. Therefore, 2-3 Boosters are recommended, as they can enhance groups of turrets at once. The weapon pedestals can even make the painstaking Star Bow absurdly easy to obtain, so keep an eye on what it offers. Implosion and Horn can help with damaging hordes of enemies by grouping them together, making them much easier to damage.

Taoist has a glitch where he can use multiple weapons of every kind. Get to the 6th upgrade and unlock Tao Arts, collect a weapon and then get anything from the Mechanical Engineer, use it and the weapons will be floating ready for attack, it is not known if there is a limit (Verification Needed)

As the game is endless, this mode will always end in failure.

In The Origin, enemies and bosses can still drop materials (though the rate seems to be reduced), the player still has to collect them manually.

After the game, Gems obtained can be calculated by the formula:

Retrieved from "https://soul-knight.fandom.com/wiki/The_Origin?oldid=68855"
Community content is available under CC-BY-SA unless otherwise noted.